Again this year, we wintered over some Claytonia. We seeded it in early October, it quickly sprouted, grew a little, and then it just sat there through the darker months. Then, in late February, it began to grow, it gained speed in March and by early April it couldn’t be kept back. You could cut some, and it grew right back. Edible? More than edible. Claytonia is like nothing else. These leaves and stalks are firm and succulent, with have a nice sweet taste, not expected from a green. The leaves are of snack quality. 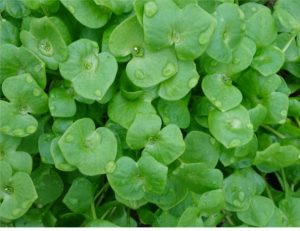 Claytonia? If we were in Northern California, we wouldn’t even be asking. It is a common plant there, and a well-know wild edible. In Vermont, it’s a delicious novelty. In it’s native habitat, Claytonia grows through the winter, makes seeds in the spring, dies in the summer, and reseeds in the fall. Claytonia is also know as Miner’s Lettuce, because during the 1849 Gold Rush in California, it was a subsistence food for those gold miners that hadn’t found any gold. The one’s that did find gold might have had it with their steaks and roasts, but there is no historical record of that.

Even though it tastes really good, some consider Claytonia to be a “superfood”. It does have a lot of good things going for it. It is seen by some to be a spring tonic, cleansing the blood and lymphatic system, similar to dandelions or wild leeks. There is some evidence that it may be an anti-inflammatory. Superfood or not, Claytonia is a welcome treat after a long, dark winter.

One Reply to “Claytonia”